What is Roe v Wade?

Roe v Wade is a decision of the supreme court justices that protects the right of a woman to end her pregnancy through legal abortion. The 1973 result was seen as revolutionary because, for the first time nationally, federal courts supported a woman’s liberty to choose a safe, legal abortion instead of making her pursue backyard illegal abortions.

The supreme court abortion rights decision ensured greater reproductive rights. Prior to the decision, it was typical for women to go to extreme measures to end their pregnancy, and Roe v Wade led to the establishment of safe medical options. It also protected the right to privacy by preventing the government from interfering in a situation where a woman is seeking an abortion. The personal choice is limited to the woman and her doctor.

What Will Happen if Roe v Wade is Overturned?

People with uteri, it’s time to get your birth control under control. The United States Supreme Court will look at Dobbs v Jackson Women’s Health Organization, which could lead to the newly expanded conservative majority overturning Roe v Wade by next year. If that happens, it means that people with uteri may not be able to access a safe and legal abortion in many states. As it stands, 13 states have already enacted laws called “trigger laws” that will ban abortion as soon as Roe is overturned. So the question really is, if Roe v Wade is overturned what happens?

If Roe v Wade is overturned, it would result in many different challenges that could affect both the individual and community. As of 2020, the maternal mortality rate (pregnancy related deaths) in the United States is roughly 23 deaths per every 100,000 births. Traditionally, abortion laws have always made exception for rape, incest, and preserving the “life of the mother.” However, recent anti-abortion trigger bans include language that narrows the definition of what is considered a potentially fatal pregnancy. A recent study estimated that banning abortion in the U.S. would lead to a 21% increase in the number of pregnancy-related deaths in subsequent years.

Back-alley abortions will come back

There is also the heightened risk of death due to seeking unsafe, “back-alley” or DYI abortions. Simply put, abortion bans will not stop abortions from occuring, it will only limit access to safe abortions. Luckily, abortion pills offer a safe at-home option, but medication abortion is not the right fit for everyone nor will it be legal in every state. To learn more about medication abortion, visit plancpills.org or contact NAF = the National Abortion Federation.

Low Income Communities will be affected the most

Communities that face more economic hardships and higher poverty levels will feel this ban the most. Those needing abortions in states where it is illegal will need to travel to obtain them, which is not always an option in the face of poverty. Even those in areas where abortion is protected may still struggle with accessibility due to cost of care. Currently Medicaid, a federal and state program which specializes in helping people with low-income, does not cover abortions except for cases of rape, incest, and life threatening pregnancies. Out of pocket prices for abortions can be as much as $1000, which is almost an entire month’s paycheck for a full time minimum wage employee.

Families will Face an Increase in Economic Hardship

A 2013 study on why people seek abortions found that 40% of the respondents reported their decision was due to financial hardship. 60% of women seeking an abortion already have child. Adding another child during financial crisis/down turn will not be good for families. From the Turnaway Study “ the group that was denied abortion had a 78% increase in having debt that was 30 days or more past due and their chances of having negative public records, such as bankruptcies and evictions, increased by 81%. They were also less likely to have a credit score in the prime range (680 – 739)”, “Being denied an abortion can lead to financial distress that lasts at least 5 years.”

Women’s advancement towards equality will be set back by decades

Women’s access to contraception advanced women’s participation in society including education, employment, and earning prospects. Limiting access to the full spectrum of reproductive health services by banning/restricting abortion will severely impact women’s role in the work force, which inturn will affect the labor market as a whole. Treasury Secretary Janet Yellen said “…eliminating the right of women to make decisions about when and whether to have children would have very damaging effects on the economy and would set women back by decades.”

If Roe v Wade is overturned, female reproductive rights will be reduced across the country with very few protected states. However, decades of work to establish the right to an abortion and to reproductive healthcare will not be completely desolate. The map below from the Center of Reproductive Rights indicates protected unprotected and hostile areas. 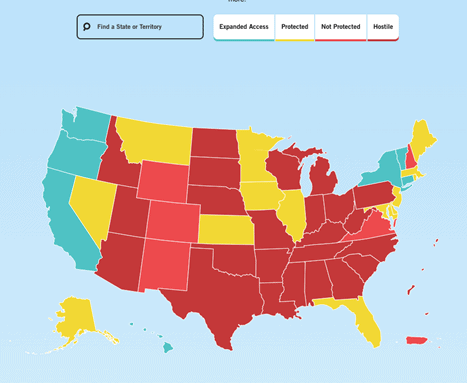 States that will allow abortion care

Below is a list of the states that will continue to allow abortion care if Roe v Wade is overturned.

States that will restrict abortion care

Below is a list of states that will restrict abortion care.

How Can Pandia Health Help?

Roe v Wade could be overturned by the supreme court at the beginning of 2022, so take time now to protect yourself and support reform to protect other women. Using resources from Pandia Health, you can plan ahead. Anyone with a uterus should take the following precautions and advise family and friends to do the same.

Make Sure Your Birth Control Schedule is Set for the Future

Get Emergency Contraception Ahead of Need

Accidents happen! Being extra prepared is never a bad idea. Get emergency contraception in order to terminate an accidental pregnancy. Also, know that Plan B and its generics do NOT work for individuals with a BMI of 26 or greater. The IUD also acts as effective birth control to block pregnancy ahead of an accident. There are two types: hormonal IUDs (Mirena, Liletta, Kylena, Skyla) and copper IUDs (Paraguard). Buying emergency contraception or getting an IUD as soon as possible are effective ways to prevent pregnancy from occurring, especially as demand increases due to predicted restricted access to abortion.

Consider skipping the placebo pills (a.k.a those that don’t contain hormones) and taking the active pills continuously. When there is no drop in hormones, bleeding will not occur, which is not only convenient but also beneficial for your health. Skipping your period decreases your risk of developing ovarian & endometrial cancer. Additionally, the fewer period products you use, the less you contribute to landfills.

Check out this TEDx talk on #PeriodsOptional featuring our CEO & co-founder, Dr. Yen!

In order to stand together against abortion restrictions and oppose a legal challenge to Roe v Wade:

Get Started
« does birth control make you moody
Back to Resources
What are Acne Oral Antibiotics? »