Spotting or bleeding between periods can happen for many reasons. In most cases, those reasons are benign. But dealing with breakthrough bleeding is unpleasant and disruptive, and it’s important to speak to a doctor if this is happening, even though in most cases, breakthrough bleeding isn’t a major cause for concern. Starting a new form of contraceptive is a common reason for spotting between periods. But why does this happen, and when should a woman consider switching birth control if this is an issue for her? The following article will explore why breakthrough bleeding on birth control happens, and what to do about it.

Many women can use birth control to stabilize their hormones and regulate their periods. Pandia Health can help deliver your birth control to your mailbox or if you’re in CA/FL/TX our expert doctors can write you a prescription that best fits your needs. Sign up today! If you’re curious about how Pandia Health works, learn more about our services here.

Why do contraceptives cause spotting?

Breakthrough bleeding or spotting between periods while on a new form of birth control happens to a lot of women. Breakthrough bleeding is most likely to occur within the first couple of months after starting the pill, or if a woman is late when taking the pill. Birth control pills need to be taken as close to the same time every day as possible; otherwise, spotting can occur. Skipping a dose, or being incredibly late on a dose can also cause ovulation. It’s crucial that women on the pill take it at roughly the same time every day without fail to prevent these issues.

Still, a woman can take the pill at the same time every day and still get breakthrough bleeding. Birth control pills contain a combination of estrogen and progesterone hormones. These hormones stop ovulation from occurring. Also, they change the consistency of cervical mucus, and also make the endometrial or uterine lining hostile to implantation. Thinning the uterine lining to prevent implantation and also changing around estrogen levels can induce breakthrough bleeding. 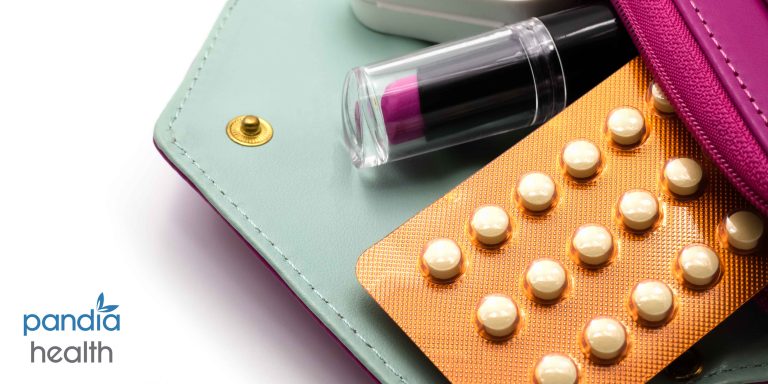 What types of birth control are most likely to cause spotting?

Birth control comes in many different forms, including hormonal methods, barrier methods, natural contraceptives, intrauterine devices, and emergency contraceptives. Any birth control methods that contain hormones are the most likely to cause breakthrough bleeding.

When is breakthrough bleeding a cause for concern?

If birth control isn’t the reason for breakthrough bleeding, several other things could be causing spotting between periods. Not all of these reasons are cause for concern, but it is important to see a doctor regardless.

Adolescent girls are more likely to experience breakthrough bleeding soon after starting their periods. It can take several years of menstruation for the body to establish a cycle and balance hormones. Also, menopausal women are likely to experience breakthrough bleeding and irregular periods as they exit their reproductive years.

Some STIs can cause abnormal bleeding and spotting between periods. Chlamydia and gonorrhea can infect the cervix and cause bleeding and inflammation. Other signs of a sexually transmitted infection include pelvic pain, pain during sex, cloudy urine, and heavy periods.

Rarely, bleeding between periods, especially if spotting occurs after sexual intercourse, can be a sign of cervical cancer. It’s critical that women between the ages of 21 and 65 are screened for cervical cancer every 3 to 5 years.

Breakthrough bleeding can occur when a fertilized egg is implanting in the uterine lining. Some women will experience spotting throughout the early stages of pregnancy. Although this can be a sign of an impending miscarriage or an ectopic pregnancy, that is not always the case. Pregnant women who experience bleeding should see a doctor.

Uterine fibroids and polyps are benign growths that can cause spotting in between periods, or even after a woman has gone through menopause. Fibroids and polyps that cause bleeding and discomfort can be surgically removed.

Endometriosis, where the endometrium grows outside of the uterus, can cause spotting along with other painful symptoms. Fortunately, there are different types of birth control can that alleviate endometriosis symptoms and prevent abnormal breakthrough bleeding.

In this condition, the uterine lining grows too thick and can cause breakthrough bleeding. Usually, the condition is benign, but it can be a precursor to cancer. Endometrial hyperplasia can be treated with hormone therapy and minor surgery.

Most of the time, breakthrough bleeding isn’t anything to worry about. But if it’s accompanied by pain, happens frequently, or is heavy, it’s important to rule out more serious issues such as STIs or an ectopic pregnancy. If spotting is caused by birth control, there are many different kinds of birth control methods a woman can try that won’t have breakthrough bleeding as a side effect. If you’re looking to switch or start a new form of birth control, Pandia Health offers quick, convenient birth control delivery services that are also affordable for women without health insurance coverage.

Disclaimer:The views expressed in this article intend to inform and induce conversation. They are the views of the author and do not necessarily represent the views of Pandia Health, and are for informational purposes only, even if and to the extent that this article features the advice of physicians and medical practitioners. This article is not, nor is it intended to be, a substitute for professional medical advice, diagnosis or treatment, and should never be relied upon for specific medical advice.