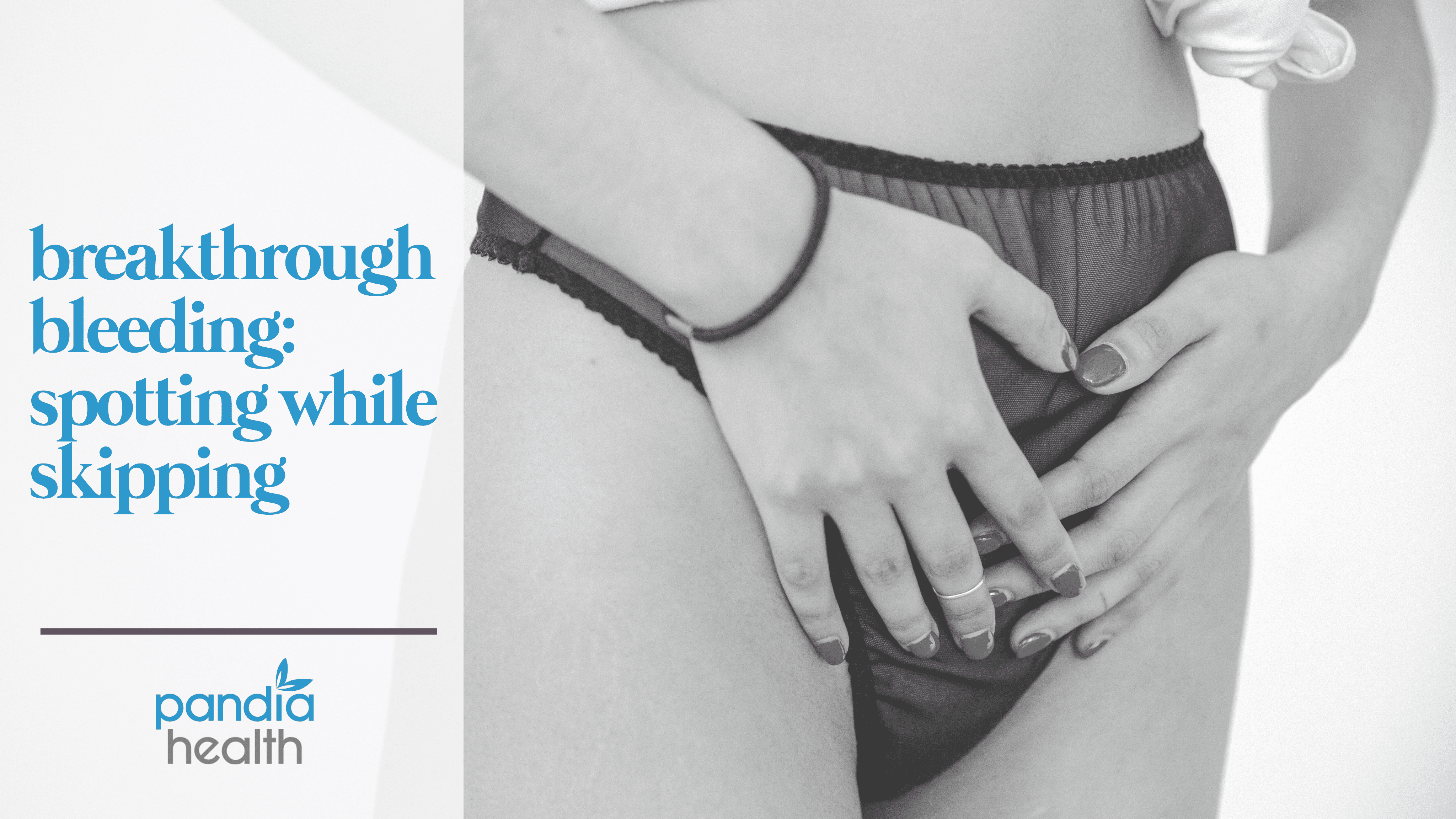 Breakthrough bleeding (also known as spotting) is bleeding which occurs when you’re not expecting your period. The bleed is usually lighter than your usual menstrual flow, but it can be the same in some cases. Often it’s caused by not taking your pill at the same time everyday.

This doesn’t mean taking the pill at a different time of the day every day is the only reason why women experience breakthrough bleeding. The truth is that breakthrough bleeding can be caused by many factors. Read on to find out what causes it, and when you should speak with your doctor about unexpected bleeding. (Hint: it’s always best to talk to your doctor if you experience bleeding when you don’t expect to.)

What is breakthrough bleeding while skipping?

So, you’ve decided to start using your birth control to skip your period (#PeriodsOptional, everyone!) Living a period-free life is exciting at first, but a few months later… breakthrough bleeding starts messing up your plans.

Skipping periods is possible with several types of birth control when you don’t take the week off, or take the placebo with certain forms, moving directly onto your next pack.

Breakthrough bleeding (also known as spotting) is bleeding which occurs when you’re not expecting your period. The bleed is usually lighter than your usual menstrual flow, but it can be the same in some cases. In this case, we’re talking specifically about spotting while using birth control to skip your period.

How Can Pandia Health Help You?

If you are experiencing unexpected bleeding, it is recommended that you talk to your doctor as soon as possible. If your doctor is not a birth control expert, Pandia Health is here to help. Our expert birth control doctors are available to prescribe the best birth control for you – it’s easy to get started.

We pride ourselves on providing expert birth control care. Our doctors prescribe birth control based on the “Pandia Health algorithm” which takes into account several factors, including age, race/ethnicity, BMI, and your personal medical history, all of which can influence your body’s reaction to birth control. For example, if you are under 30 years old, it’s best to be on a method that has at least 30mcg of estrogen.

With just one $25 payment a year, you can get access to our expert doctors (available in these states) for 364 days. To change your birth control, contact us today!

Having your period while taking your active pills can be alarming. This is called breakthrough bleeding. It’s one of the most common side effects and often is because you took your pill late or missed a pill. Talk to your doctor if you have questions.

A part from this one, there are many different causes of breakthrough bleeding. Let’s explore some of the most common causes.

When you start skipping your periods, you may experience breakthrough bleeding as your body needs time to adjust to the presence of new — or more — hormones. Without a week off, there will be a constant presence of hormones that your body will need to adjust to. The spotting may not begin right after you start your new birth control. It is possible to have a few months without bleeding at all, and then experience spotting two to three months later.

Forgetting to take the pill

Breakthrough bleeding isn’t always about the body getting used to new hormones. Sometimes it comes down to human error.

If you experience unexpected breakthrough bleeding, this could be because you forgot to take your daily pill! Birth control pills need to be taken consistently at the same time every day and it can be easy to forget. If this has happened to you, you’re not alone. A 2017 survey of sexually active women who In a 2017 survey who took oral contraception reported that 16% of women aged 15 to 44 years reported missing two or more pills in the 4 weeks prior.

However, it is important that you don’t miss pills in the future. There are many ways to make sure you don’t forget your pills again in the future, such as reminders and apps.

There are many serious risks that come with combining birth control with smoking, such as a greater risk of cardiovascular issues like strokes or heart attacks.

Studies have also shown that breakthrough bleeding is more often observed in people with uteruses who smoke cigarettes, compared to those who don’t. If you are concerned about smoking affecting your birth control and your health, there are resources available to help you quit.

You may have heard of the phenomenon of ‘period syncing’, which can happen when your cycle syncs with that of your roommate, colleague or sibling, and may lead to breakthrough bleeding. If you spend a lot of time around someone with a particularly regular cycle, you may experience breakthrough bleeding as your cycle of hormone production attempts to match theirs.

When to worry about breakthrough bleeding?

There are a few causes of breakthrough bleeding that are more serious. For example, if you are also experiencing diarrhea and vomiting, it may be because the pill hasn’t been absorbed properly or certain medications you have taken concurrently have interacted with the pill. Let’s break down some of the more serious causes of breakthrough bleeding. As always, if you feel uncomfortable, consult with a doctor.

Fibroids are small tumours that can develop in your uterus and can be caused by a variety of factors including hormonal changes during menopause or genetics. Fibroids can mess with your menstrual cycle, causing heaving or longer periods and spotting between periods.

While they are usually non-cancerous and don’t cause any complications, it is always recommended that you see your doctor if you believe this to be the cause of your symptoms.

Pelvic inflammatory disease is a common condition caused by the spread of a bacterial infection to the reproductive organs. It’s most often experienced by women between the ages of 15 to 24 who are sexually active. A common symptom is unexpected bleeding, both between periods and after sexual intercourse.

PID is not a condition to ignore as it can worsen if not treated and is an example of a time when your breakthrough bleeding should be reported to your doctor. PID can be easily treated with a course of antibiotics.

Sexually transmitted infections (such as gonorrhea or chlamydia)

Bleeding during periods is a common symptom of sexually transmitted infections such as gonorrhea and chlamydia. This unexpected bleeding is caused by inflammation as a result of the STI.

If you believe you have an STI, it is important that you get tested and receive medical support from a doctor or sexual health clinic as soon as possible.

Endometriosis is a health condition caused by irregular endometrial tissue growth. It is estimated to affect approximately 10% of women in their childbearing and can have a huge impact on a woman’s menstrual health. In addition to irregular bleeding, common symptoms include painful periods, pelvic pain, heavy and issues with fertility.

While endometriosis can be challenging to treat, there are loads of options available to help ease symptoms, including the prescription of birth control.

How long does breakthrough bleeding last?

How to control or stop breakthrough bleeding?

If you’re taking the pill, make sure to take your pill at same time every day. This will help to prevent breakthrough bleeding. If you are using the pill to skip your period, keep reading to learn how to stop spotting. You can try taking 600 mg of ibuprofen WITH FOOD up to 3 times a day, for 5 days to stop breakthroughbleeding.

If you’re spotting and haven’t taken at least three weeks of active pills, continue taking them until you reach the end of the third week. At this point, stop taking the medication and let your uterus bleed. If you are taking the pill at the same time of day, every day are still experiencing breakthrough bleeding, we recommend talking to your doctor about trying a different birth control pill.

Did you know that there are 8 different progesterones and 2 levels each, over 40 types of birth control pills available, 3 types of rings and 2 types of patches? Finding the right medication for you can help reduce the chances of breakthrough bleeding, and is worth discussing with a doctor.

Pandia Health is the most trusted provider for online birth control consultation, with an exceptional team of doctors who can prescribe your birth control online through a telemedicine consultation. The next step is getting your contraceptive method of choice delivered for free — even if you are uninsured! We accept most insurances. No insurance? No worries! Most pill packs start at $15/month and are sent straight to your mailbox with FREE delivery. 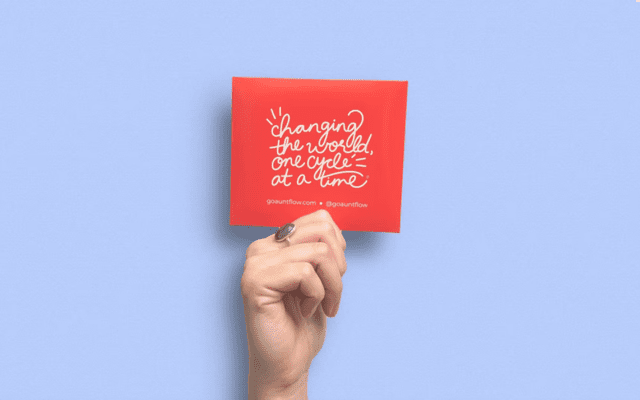 Breakthrough bleeding typically appears as traces of blood on your underwear. It probably will look similar to your normal period blood, although in most cases it will be lighter.

How long does breakthrough bleeding last?

Can stress cause breakthrough bleeding?

In some cases, stress can trigger breakthrough bleeding, as it can affect our hormones. Stress can be emotional or physical.

Breakthrough bleeding will typically be the same color as your normal period blood (red or dark brown).

How to stop breakthrough bleeding on the pill immediately?

The best way to resolve breakthrough bleeding is to go off of the pill for a week. This will reset your uterus. Then, resume taking birth control, and the bleeding should go away.

How to stop breakthrough bleeding from missed birth control pills?

Make sure to take your birth control pills consistently to avoid breakthrough bleeding. It might help to set an alarm or to always take it at exactly the same time every day so you do not forget.
The above information is for general informational purposes only and is NOT a substitute for professional medical advice. Always seek the advice of your doctor/primary care provider before starting or changing treatment.