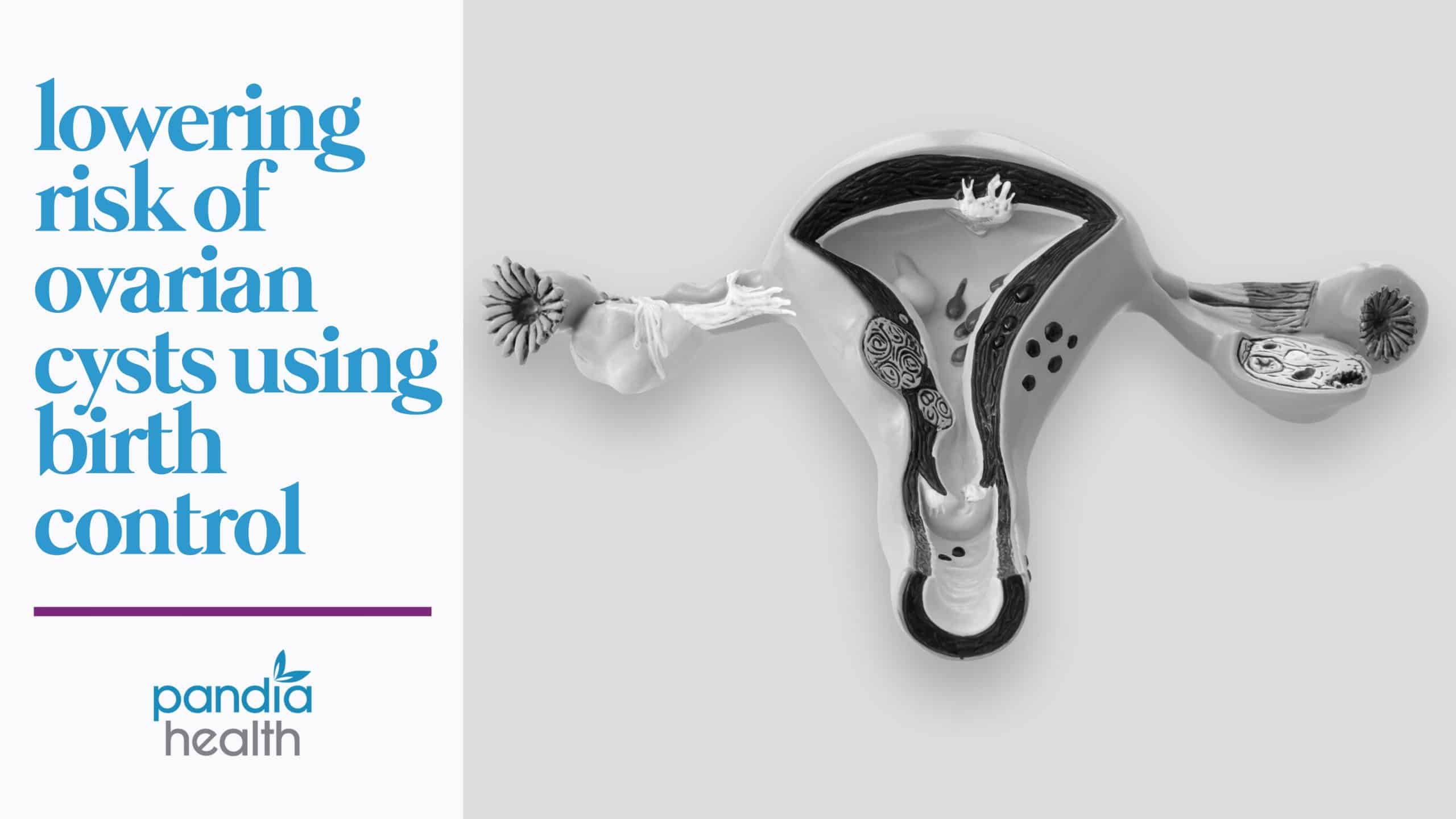 While ovarian cysts typically have a negative stigma, they are normal and can be resolved on their own or with minor treatment. Although there are multiple interventions that may be put in place to reduce the likelihood of developing this health condition, the following article will cover the relationship between ovarian cysts and hormonal birth control.

What is an ovarian cyst?

TLDR: An ovarian cyst is a bubble of fluid that can be found in an ovary (a.k.a the female reproductive organ) or on its surface.

During the menstrual cycle, the ovaries release an egg  in a process called ovulation In order for this process to occur, a fluid-filled sac, or follicle must develop around the egg. In some cases, this sac grows larger than normal and becomes a cyst. 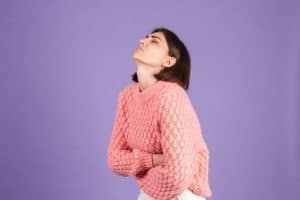 What symptoms occur if an ovarian cyst is present?

A cyst can grow to about a half inch to an inch and may even double the size of the ovary. In most cases, the body will reabsorb the fluid from the cyst within a few weeks or months and the individual will not notice any bodily changes. However, some cysts may lead to unpleasant symptoms including, but not limited to the following:

If detected early, a cyst can be treated and will resolve quickly. In some cases though, a cyst can keep growing and lead to additional complications. For instance, the growth may lead to ovarian torsion, in which the ovary becomes twisted. An abnormally large cyst may also rupture, or burst and cause internal bleeding. Signs of a problematic cyst include:

If you experience one of more of these symptoms, consult a doctor immediately. They can help determine the best course of action going forward.

What are the different types of ovarian cysts?

These two most common types of cysts are as follows:

During the halfway point of a menstrual cycle, an egg bursts out of its sac, or follicle and travels down the fallopian tube. In the event that an egg is not released, but the follicle continues to grow, a follicular cyst will form.

Once the follicle releases an egg, it becomes a corpus luteum. If fluid accumulates inside, the corpus luteum will grow into a cyst.

Follicular and corpus luteum cysts are benign (a.k.a non-cancerous) and typically resolve on their own. If they are particularly large, a doctor might opt for monitoring via ultrasound for up to six months to ensure that no further complications occur.

There are a few other types of ovarian cysts that are less common, as they are not related to the normal function of an individual’s menstrual cycle:

These contain tissue, such as hair, skin, or teeth because they form on embryonic cells (a.k.a they present in the ovary from birth). They typically occur on the face, lower back, or ovaries and can be removed via medical techniques such as surgery. In most cases, they are benign.

These develop on the surface of an ovary and are typically filled with a watery or mucus material. In most cases, they go away on their own and do not cause symptoms. However, in the event that they become malignant, they may become painful and require removal.

These develop as a result of endometriosis, a condition in which endometrial cells grow on areas outside of the uterus such as the ovaries, bowels, and pelvis. Individuals who develop endometriomas may experience symptoms regardless of the size of the actual cyst. Being that these cysts are common in those with endometriosis, birth control may be implemented to slow their growth and, in turn, manage pain. 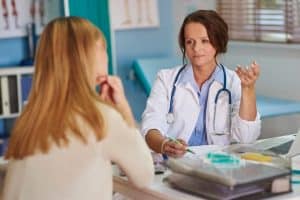 How are cysts treated?

Thankfully, many cysts resolve on their own (i.e. no intervention is required). However, those that have grown abnormally large or ruptured may need to be removed in order to relieve the individual of symptoms.

A cyst can be detected via a pelvic exam. Depending on its size and whether it contains fluid, the doctor may recommend further tests in order to determine the best course of action. For instance, an ultrasound may be taken to create an image of the uterus, which can be further analyzed to confirm the presence of a cyst.

If it is determined that a cyst is present, treatment may vary based on the severity. In some cases, the doctor may have an individual wait and come back for an exam at a later date to monitor any changes. In the event that a cyst becomes large and causes pain, removal may be necessary. This could occur in the form of a laparoscopy, a process in which an instrument is inserted into the abdomen. In some more serious cases, the entire affected ovary may be removed via a surgery called oophorectomy. While cysts cannot be entirely prevented, an individual may be able to decrease their risk of developing one if they take hormonal birth control. Being that an ovarian cyst forms during the process of ovulation, stopping this process will, in turn, reduce the likelihood that a cyst will form. With that said, birth control should not be used as a means to shrink a cyst that is currently present.

How can birth control prevent ovarian cysts from forming?

Taking hormonal birth control, such as the pill, patch, ring, or IUD can be an effective method in preventing ovarian cysts from forming. Combination birth control pills (a.k.a those that contain estrogen and progesterone) are the most effective at blocking ovulation. The mini-pill (a.k.a those that just contain progestin) have an unpredictable effect on ovulation and are thus, less effective at preventing cysts from forming. Individuals who skip their periods while on birth control by not taking the row of placebo pills further decrease their likelihood of developing cysts. To learn more about how to skip your periods using birth control, check out our #PeriodsOptional page. 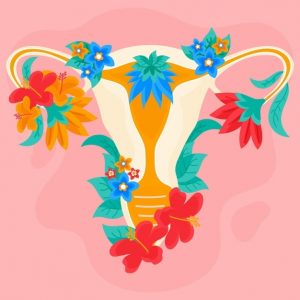 Is the presence of ovarian cysts always an indicator of PCOS?

Polycystic Ovarian Syndrome (PCOS) is a problem with hormones that affects women of child-bearing age. The word “polycystic” means “many cysts” – individuals with PCOS develop many fluid-filled sacs inside their ovaries. There are several symptoms associated with the disorder including, but not limited to irregular periods, acne, weight-gain, and headaches.

With all of that being said, having ovarian cysts is not an indicator of PCOS. However, if additional symptoms are present, the affected individual should consult a doctor. They may order a blood test and/or pelvic exam in order to determine whether or not PCOS is the underlying issue.

Many ovarian cysts are benign, but some could be cancerous. This is more common in older, post-menopausal women. With that said, all cysts should be checked by a doctor. If they find that it is cancerous, they may refer you to a gynecologic cancer specialist. In some cases, a total hysterectomy (removal of the uterus, ovaries, and fallopian tubes) may be necessary.

Who is most at risk of getting an ovarian cyst?

Individuals with a uterus who have regular periods are most at-risk for getting an ovarian cyst. The majority of those who menstruate every month will form at least one follicle or corpus luteum each month during ovulation. For this reason, skipping periods using birth control will reduce the likelihood of developing ovarian cysts.

Most cysts do not cause any symptoms and may not even be noticed by the affected individual. The cyst becomes problematic if it grows enough to cause pain and other unpleasant symptoms. Thankfully, only about 8% of women who ovulate regularly will have develop a cyst that causes other complications. For postmenopausal women a.k.a women who have not gotten their period in over a year), an ovarian cyst is a risk factor for cancer.

While many ovarian cysts will not lead to further complications, it is important to consult a doctor if you notice abnormal symptoms. Thankfully, with the proper course of action, ovarian cysts can be resolved quickly. If you develop an ovarian cyst, know that it is normal and common! 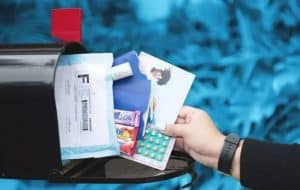 With Pandia Health, you can skip the trip to the pharmacy and get your birth control delivered right to your mailbox. Sign up today so you can get that #PandiaPeaceOfMind and feel confident that you will never run out of birth control on our watch.

How to prevent ovarian cysts?

Yes! Ovarian cysts are caused by ovulation. Birth control stops ovulation, which in turn, prevents ovarian cysts from forming. However, if a cyst is already present, birth control will not reduce its size or severity.

Can birth control cause ovarian cysts?

Birth control does not cause ovarian cysts. If anything, it can prevent them from occurring.

Can IUD cause ovarian cysts?

In some cases, individuals who have an IUD may develop ovarian cysts.

Is sex safe with ovarian cysts?

While sex can be safe with ovarian cysts, it may be uncomfortable and even increase the risk of rupture. Furthermore, it may be necessary to wait to have sex until the cyst goes away.

While it is unlikely that an ovarian cyst will stop periods, it may cause them to become irregular (i.e. heavier and more frequent than normal).

How fast can an ovarian cyst grow?

Most ovarian cysts grow very slow (for up to a year).

How to get rid of cysts on ovaries?

While most ovarian cysts go away on their own, some may require surgical removal. It is unlikely that the entire affected ovary will need to be removed, but this intervention is possible.