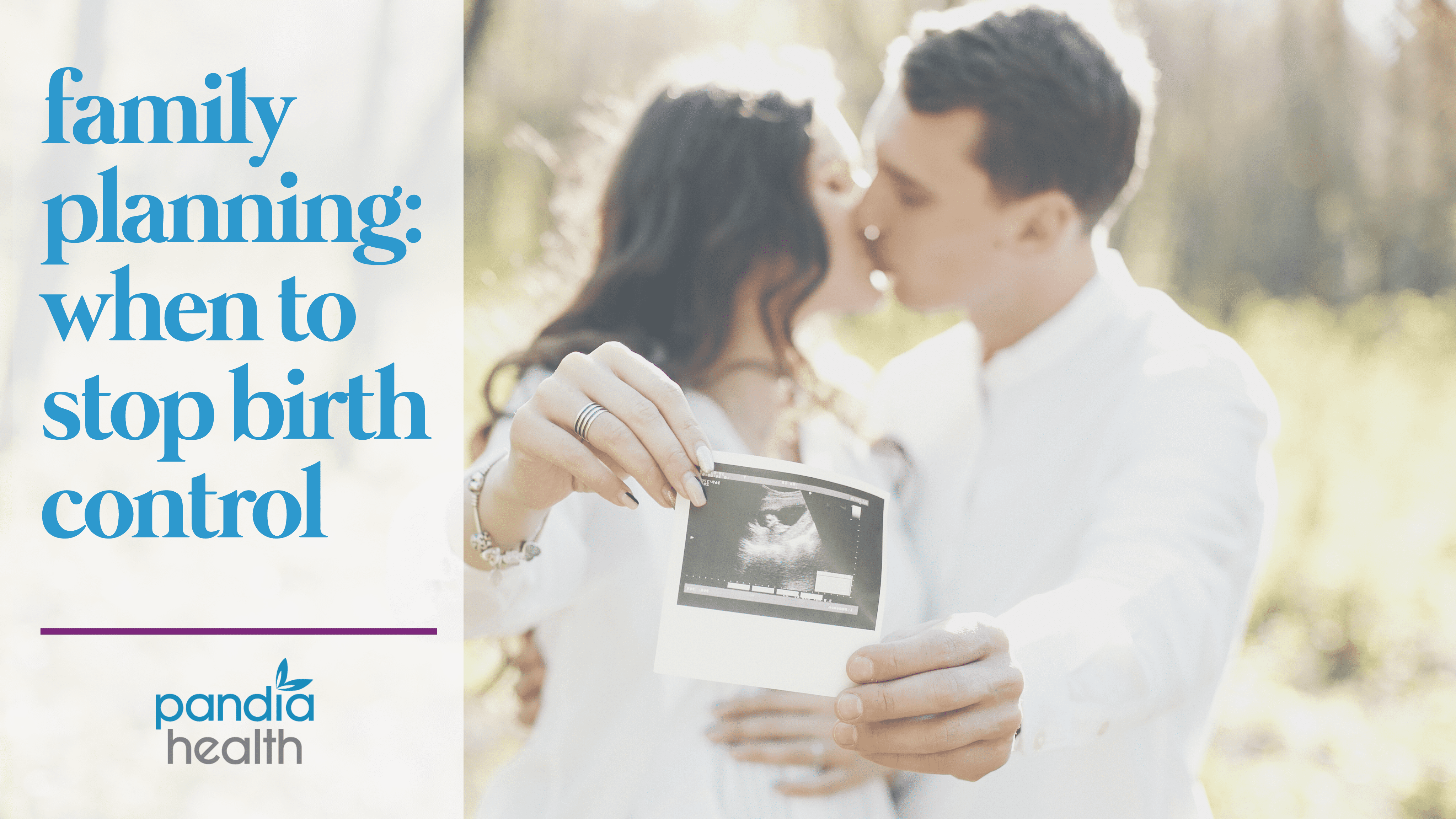 Family planning is often thought of as the time in which a woman determines she is ready to have children. While this alone may seem simple, there are several components to consider, and they  begin the moment a woman gets her first period and is able to become pregnant.

How does birth control relate to family planning?

97% of women of reproductive age in the U.S. will use a form of contraception at some point in their lives. Hormonal contraceptives (i.e. the pill, patch, ring, IUD) in particular not only offer numerous health benefits for women, but they are also incredibly useful for preventing unwanted pregnancy.

Hormonal birth control works by stopping ovulation. If a woman does not ovulate, or release an egg, she cannot become pregnant even if she has sex without using an additional barrier method. Furthermore, in order to get pregnant, a woman must stop taking birth control.

Stopping birth control to get pregnant

As soon as she is ready to become a mother, a woman can stop taking her birth control. In general, her fertility will return within 1 month of stopping the pill or removing the patch, ring, or implant, or IUD. It is possible to get pregnant immediately after stopping birth control, but all bodies are different and some may need extra time to readjust to a normal fertility cycle.

One of the most significant factors influencing the timeline of a woman’s fertility returning is what type of birth control method she used. It is possible to get pregnant after stopping any form of contraception, but the timing may vary based on the type. For instance, some types require removal from a medical professional, while others can be stopped on one’s own accord. With that said, it is always a best practice to consult a doctor before making any changes to your current reproductive health routine.

Natural and barrier methods of birth control – male and female condoms, diaphragms, spermicide, natural family planning (NFP), and withdrawal – do not impact ovulation. As long as a woman is ovulating regularly, she can get pregnant as soon as she has unprotected sex. With that said, both partners should get tested for STIs in the event that they will have unprotected sex, as this can impact fertility and general health.

Combination birth control pills, the Nuvaring, and the patch all stop ovulation. Most women will ovulate within a few weeks after stopping the pill, patch, or ring (if not, they should consult a doctor, as there could be an underlying issue).

Oppositely, some women may  ovulate immediately after stopping the pill. , While on the pill, the body is given a steady dose of hormones that trick it into thinking it is already pregnant, so the ovaries do not release an egg. In some cases, the sudden lack of hormones can trigger the ovary to release an egg.

Dcotors may advise women who have stopped taking the pill to use condoms and wait to have unprotected sex for at least three menstrual cycles. This is not a means to allow fertility to return (birth control does not impact fertility), but instead a way to determine the pregnancy timeline. Knowing exactly when a pregnancy has occurred makes it easier to track the growth of the fetus and progression of the pregnancy.

The same rules apply for extended-cycle pills and progestin-only pills.

There are two types of IUDs – the hormonal IUD and the copper IUD. If a woman has an IUD and decides she wants to get pregnant, she must have it removed by a medical professional. Although the IUD can prevent pregnancy for five to ten years, a woman can get pregnant once it is removed.  In fact, pregnancy rates for women who had IUDs removed are the same as the general population.

The birth control implant, or Nexplanon®, is a progestin-only hormonal birth control that goes in the arm via a surgical procedure. The implant releases a steady stream of progestin hormones for up to  three years. A woman can become pregnant immediately after having Nexplanon removed. Regardless of how long a woman has used Nexplanon, she can still get pregnant –.

The birth control shot, or Depo Provera®, prevents pregnancy for up to 12 weeks. Once this time has passed, a woman must receive another shot in order to maintain the same level of protection. This is the main type of birth control that may impact a woman’s fertility for a longer period of time. In fact, the makers of Depo Provera advise women to stop taking the shot a year before they plan to become pregnant.

How long after stopping birth control can you get pregnant?

It is possible to get pregnant anywhere from immediately after to one month after stopping all birth control methods aside from the shot. Furthermore, if a woman is trying to get pregnant, she can starting having unprotected sex any time. She may want to have a pregnancy test on hand in order to regularly track her family planning process.

The birth control shot, on the other hand, impacts fertility for a longer time compared to alternative methods. It is possible for fertility to return as soon as  three months after stopping, but  this is rare. In most cases, it may take at least one year to get pregnant after stopping the shot. This reinforces the importance of family planning – if you have a specific timeline for bearing children, you may want to avoid the shot, as it cannot be as easily reversed as other methods of contraception. Ovulation after birth control

Despite common belief that birth control can have a long-term impact on ovulation, this is typically not the case. The hormones in birth control, estrogen and progesterone, work to thicken the mucus around the uterus to keep sperm from entering and thin out the lining of the uterus so that a fertilized egg is less likely to attach. The bleeding that is experienced on the birth control pill (specifically when one takes the placebo pills at the end of a pack) is not a period, but rather a reaction to the drop in hormones. However, once a woman stops taking birth control, her ovulation cycle will regulate, in turn, allowing her to get pregnant.

How to get pregnant after birth control?

Thankfully, the answer to this is simple. In order to get pregnant, one needs to stop taking whichever form of birth control they are currently using. Within one week to one month of having unprotected sex, she may become pregnant. The only exception to this is if a woman used the shot, as this may have a longer-term impact on fertility. Additionally, if a woman does not become pregnant after having unprotected sex, she should consult a doctor.

Can birth control cause infertility in the future?

Birth control has not been shown to cause infertility. Furthermore, most women should be able to get pregnant even if they have taken birth control.

How long after stopping the pill will I ovulate?

This varies based on the timing in which a woman stops taking the pill. However, it is common to ovulate one to three months after stopping the pill.

Can you get pregnant right after stopping birth control?

Does birth control stop you from ovulating?

If you would like to learn more about your reproductive health, check out our FAQ. At Pandia Health, we believe that all women should have access to affordable birth control! Sign up for our FREE delivery service so you can #SkipTheTrip to the pharmacy and never have to worry about running out of birth control.