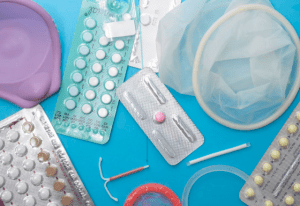 Although the birth control pill and other hormonal contraceptive devices are modern inventions, birth control has been around for thousands of years. The earliest known recordings of birth control methods date back to ancient Mesopotamia, around 1850 BC. The ancient Egyptians, Greeks, and Romans all had various forms of birth control. Thankfully, today’s women have a chance to take advantage of safer, more reliable contraceptives. The following article will explore the history of birth control, and how the pill has changed women’s lives.

What were the earliest forms of birth control?

The earliest forms of birth control, as well as abortion, were found in Ancient Egypt and Mesopotamia as far back as 1850 BC. Papyrus scrolls were found to contain directions on how to make birth control, using honey, acacia leaves, and also lint as a form of cervical cap to prevent sperm from entering the womb.

In the Kahun Gynecological Papyrus from 1850, pessaries of acacia gum as a contraceptive are described. Extended breastfeeding for up to three years was also used as a form of birth control in Ancient Egypt. Perhaps one of the most famous ancient forms of birth control was the silphium plant, native to North Africa. This plant was used as a contraceptive and was incredibly popular in ancient Greece and Rome. The plant could only be grown in a small area of what is now modern-day Libya. Over-cultivation of the plant led to its eventual extinction.

In ancient Greece, many plants were used as a form of birth control, including asafoetida, a close cousin of the extinct silphium. Queen Anne’s Lace was another popular contraceptive plant, and in some parts of India, it is still used for birth control today.

Yes, many ancient forms of birth control would have been quite toxic and potentially dangerous, not to mention ineffective. However, pregnancy and childbirth alone killed millions of women in antiquity as they didn’t have today’s modern medical interventions, so it is understandable why many women took on the risks that came with ancient birth control. In ancient Greece, women were advised to drink copper salt dissolved in water as a way to prevent pregnancy for up to one year. Copper salt is toxic.

What superstitions and wives tales surrounded birth control before the modern

In the middle ages in Europe, the Catholic Church deemed birth control immoral. Despite the Catholic Church’s teachings on birth control, women would still use the pull-out method and experiment with inserting different herbs and plants into the vagina to block sperm. That didn’t stop unintended pregnancies, however. In some cases, families would sometimes resort to infanticide. During the middle ages, women also took certain herbal concoctions to induce a miscarriage. Papal bulls and other religious edicts were issued from the Catholic Church, condemning women who performed abortions and administered contraceptives as witches.

Barrier methods, such as condoms, have been around since at least the Renaissance. However, they were primarily used to prevent STIs, not pregnancy. Their invention was necessitated by outbreaks of syphilis across western Europe. Condoms were not used for pregnancy prevention until the early 1600s.

In the early 1800s, the U.S. had one of the highest birth rates in the world. The average woman in the U.S. in 1800 had given birth to 8 children. By the late 1800s, the average woman had given birth to 3 children. At this time, many religious and political organizations issued many warnings against the moral and physical dangers of family planning. But despite these warnings, women continued to implement family planning methods.

In the 1840s, many state legislatures banned the sale and use of contraceptives. By 1873, the federal government prohibited contraceptives. In 1888, abortion was outlawed. These laws were part of the Comstock Act. Before the mid-1800s, contraceptives and abortion were legally accessed across the fledgling country, though not all methods were effective or even safe.

Before chemical and hormonal contraceptives were invented, people in the U.S. used a combination of the withdrawal method, and also vaginal suppositories and pessaries which blocked sperm from entering the cervix. Antiseptic spermicides and douching solutions were used. After the mid-1800s, condoms became more popular as a means to prevent both pregnancy and STIs. New manufacturing techniques and a decrease in the price of rubber attributed to their increased popularity in the Victorian era. Contraceptive products were marketed as “feminine hygiene” products, or “Mother’s friend,” “female wash, female tonics, and female remedies.”

Abortions were also used in the 1800s in the U.S. They were considered legal until the time of what was called the “quickening”, when a woman could feel the fetus moving. From 1830 to 1860, abortion rates steadily rose, to an estimated one in five pregnancies. Women used drugs to induce miscarriage. Physicians and other trained practitioners would perform surgical abortions. At the time, white, middle-class Protestant women were the most likely to access abortions.

As the Victorian era came to a close, birth rates continued to decline as women became more educated about birth control methods. Industrialization also made birth control devices more affordable than ever before.

In 1909, the first intrauterine devices made out of silkworm guts were introduced and further developed throughout the 1920s in Europe. In the U.S., the banning of information surrounding safe sex and contraception made it dangerous for doctors and other advocates of women’s reproductive health to distribute information and birth control products.

Margaret Sanger popularized the term “birth control” around 1914. She opened the first birth control clinic in 1916, but it was shut down nine days later because it violated the Comstock Act and its associated laws. Sanger was arrested and put on trial. The coverage of the trial helped to spark the birth control movement in the U.S. Donors and other people associated with the feminist movement supported Sanger and funded her future endeavors in the arena of reproductive health. In 1921, Sanger went on to found the first birth control league in the U.S. 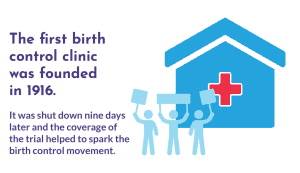 The work of Margaret Sanger and other prominent feminists and doctors helped to promote birth control and the idea of separating sex from procreation. Although it was still a divisive topic, birth control found its way into the mainstream. From the 1920s to the 1950s, U.S. attitudes toward birth control changed dramatically. The concept of birth control began to raise questions about personal freedom, liberal and conservative values, government intervention, religion and politics, and ideas regarding sexual morality and social welfare.

When was the pill invented?

In the 1950s, Planned Parenthood Federation of America, Gregory Pincus, and John Rock created the first birth control pills. The pills did not become widely available until the 1960s. In the mid-1960s, the landmark Supreme Court case Griswold v. Connecticut overturned the ban on contraceptives for married couples. In 1972, the right to contraceptives was extended to unmarried couples.

With the restrictions on contraceptives lifted, many scientific and medical advances in the arena of fertility, family planning, and birth control came to be more readily available. Now, women have access to not just the pill, but also highly effective and safe intrauterine devices, patches, rings, and emergency contraceptives.

How has the pill changed women’s lives?

The pill and widespread access to a range of safe and effective methods of birth control have revolutionized women’s lives. Women and society at large experience an untold number of benefits when women have greater control over when to have children and how many to have, thanks largely to the benefits of the pill.

Access to birth control has been the top economic driver for women over the last 85 years. Research indicates that one-third of the wage gains that women have made since the 1960s is the direct result of their access to the birth control pill. Children, whether they are planned or unplanned, cost money. When women are not able to decide when to have children, they miss out on work and experience a significant decrease in lifetime earnings.

The pill has empowered women to achieve higher levels of education than ever before.

Achieving higher levels of education directly correlates with higher levels of lifetime earnings. Women who can delay their childbearing years have more opportunities to pursue their studies, with more time to obtain degrees and certifications. Having access to the pill before turning 21 is the biggest driving factor in enabling women to stay in college if they are already enrolled. College enrollment in 1970 was 20% higher among women who could access the pill than women who could not. College dropout rates are also lower for women with access to the pill than those without.

Choosing when to have children leads to better health outcomes for both mother and baby.

When women can space out their pregnancies, they experience better pregnancy outcomes and lower the risk of giving birth to low birth weight or premature babies. Family planning programs are also associated with a significant decrease in the child poverty rate as well as the poverty rate of adults.

People with uteruses not only have safer birth control in the twenty-first century, but they have a greater range of options to choose from. That means more autonomy over their body and sexual and reproductive health and the freedom to choose the right method of birth control for them.

If you’re ready to start taking the pill or want to explore your options, get started with Pandia Health today! Birth control is free with most insurance plans or available for as low as $15 a month without. We provide expert advice from expert birth control doctors, written prescriptions, and birth control delivered for free directly to your door. One payment of $25 each year gets you to access to our expert doctors for 354 days (available in these states). Contact us to embrace modern birth control today!