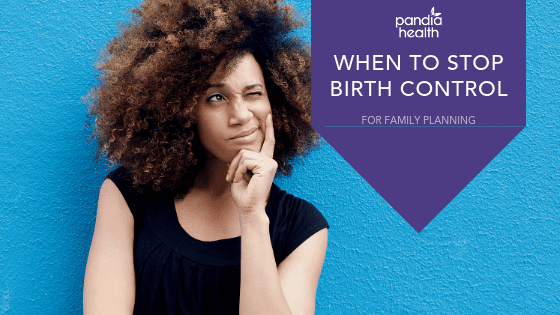 97% of women of reproductive age in the U.S. will use a form of birth control at some point in their lives. While hormonal contraceptives offer numerous health benefits for women, hormonal birth control is incredibly useful for preventing unwanted pregnancy.

According to the Guttmacher Institute, the vast majority of U.S. women only want to have two children in their lifetime. Do the math, and it turns out that for a woman to have two children, she would only be pregnant or breastfeeding for a total of 3 years of her entire life. For women who take birth control for years on end to protect against unwanted pregnancy, how long can it take for her to get pregnant once she stops taking birth control? Usually a woman can get pregnant within 1 month after stopping birth control. Though on average 85% of women having sex in a year will get pregnant with no method. So 15% of women having sex in a year will not get pregnant. On average, a woman will have used hormonal birth control for up to 15 years before she is ready to have a child. A multitude of factors can influence fertility rates after stopping birth control.

When should a woman who wants to get pregnant stop taking birth control?

As soon as she is ready to become a mother, a woman can stop taking her birth control. In general, her fertility will return within 1 month if she stops taking the pill, using a contraceptive pathc/ring, or has a hormonal IUD or implant removed.

Combination hormonal birth control works by stopping ovulation. If a woman doesn’t ovulate, she cannot become pregnant even if she has sex without using an additional barrier method. So in simple terms, no ovulation means no chance of pregnancy. Ovulation is fertility, and just because a woman stops taking hormonal birth control, does not mean she will ovulate immediately after stopping the pill or other hormonal birth control method. 10 % of women have PCOS and those women will have a difficult time getting pregnant. THOUGH they are most fertile when they get off the pill, patch, ring because those methods have “normalized” their hormones and as more time passes OFF the medications, their hormones become more abnormal and thus making it harder for her to get pregnant.

One of the most significant factors influencing the timeline of a woman’s fertility returning is what type of birth control method she used.

These types of birth control methods – male and female condoms, diaphragms, spermicide, NFP, and withdrawal –  do not impact ovulation. As long as a woman is ovulating regularly, she can get pregnant as soon as she has unprotected sex.

Some doctors will advise women who’ve stopped taking the pill to use condoms and wait to have unprotected sex for at least three menstrual cycles. This isn’t because women can’t have their fertility return after stopping the pill or because it’s dangerous to get pregnant so soon after quitting. It’s because knowing exactly when a pregnancy has occurred makes it easier to track the growth of the fetus and progression of the pregnancy. So technically, there is no medical reason why a woman can’t get pregnant right after stopping combination birth control methods.

There are two types of IUDs – the hormonal IUDs, and the copper IUD. A medical professional must remove an IUD, and once any of these IUDs are removed, a woman can get pregnant within a few weeks to a month. Pregnancy rates for women who had IUDs removed are the same as the general population.

The birth control implant, or Nexplanon®, is a progestin-only hormonal birth control. The implant releases a steady stream of progestin hormones for up to 3 years. A woman can become pregnant immediately after having Nexplanon removed. Also, it doesn’t matter how long a woman has used Nexplanon – pregnancy rates are the same as the general population.

The birth control shot, or Depo Provera®, prevents pregnancy for up to 12 weeks before a woman needs to have another shot. Depo Provera can impact a woman’s fertility for up to a year after stopping. In fact, the makers of Depo Provera advise women to stop taking the shot a year before they plan to become pregnant.

The birth control shot impacts fertility for a longer time than other methods. One study showed that on average it took women who stopped the shot 5.5 months to get pregnant versus only 3months on the pill.  It is possible for fertility to return as soon as 3 months after stopping, but it is rare. And for a very small proportion of women, it may take 15 months to get pregnant.