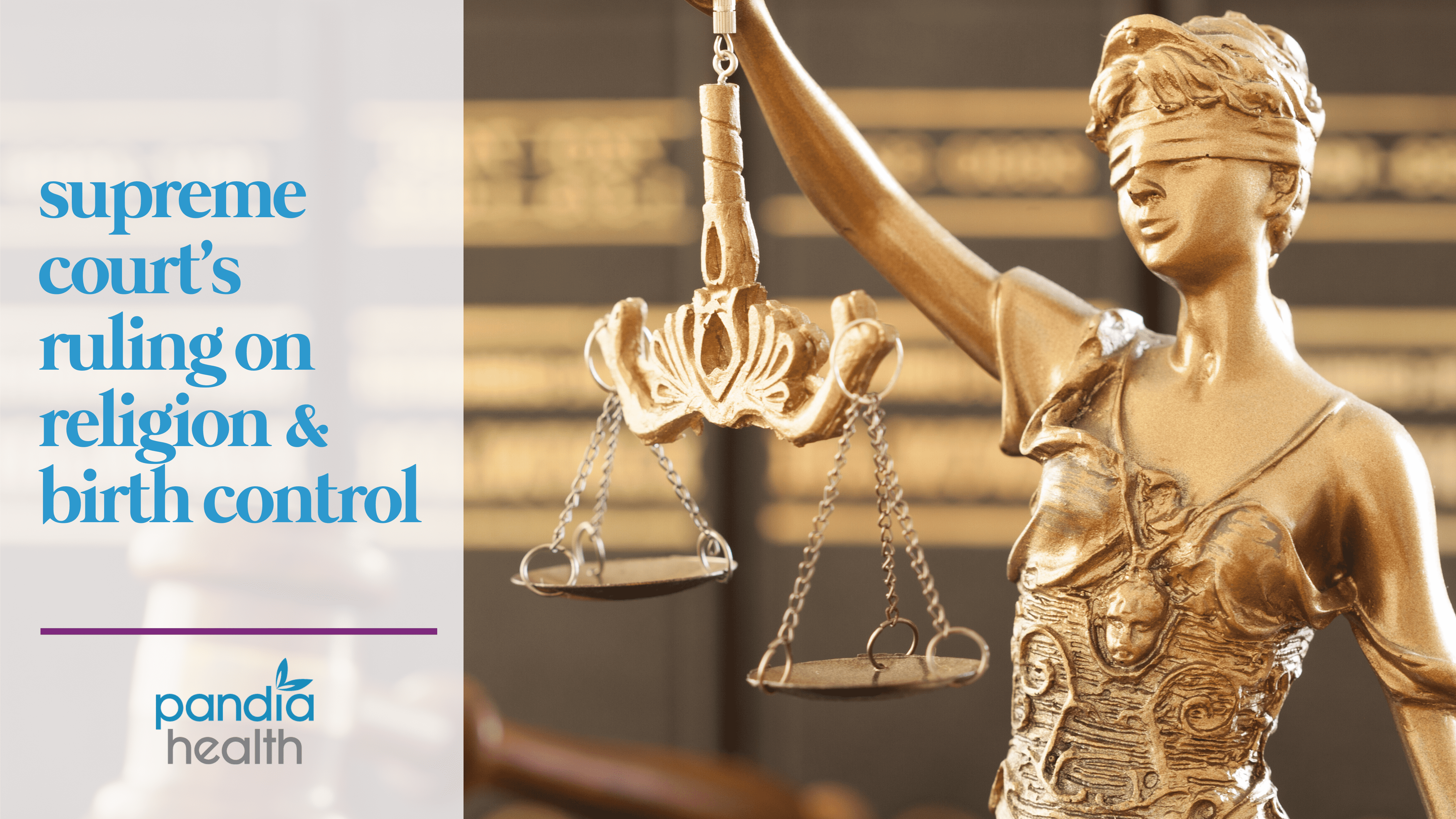 The United States Supreme Court ruled in a 7-2 decision to allow your employer or university to deny you birth control coverage based on religious or moral objection. Birth control does far more than prevent unintended pregnancy – it helps with polycystic ovarian syndrome, heavy period bleeding, and so much more. Religious freedom should not interfere with a woman’s quality of life.

Women need accessible and affordable birth control. Thousands of women are now going to be left to fend for themselves and pay for contraceptive services out of their own pockets.

Pandia Health is the ONLY #DoctorLed, #WomenFounded, #WomenLed birth control delivery company. Our CEO and Co-Founder, Sophia Yen MD MPH, understands countless women will lose their access to birth control because of this ruling.

Liberty and Justice for ALL

The Supreme Court’s decision hurts those with uteri and families whose members have uteri. Particularly during this pandemic as hospitals are overwhelmed, if families do not want to have another child at this time, we should help them achieve that.

Supposedly, the ruling supports religious freedom but it actually does the exact opposite – it allows the employer to impose their religion onto their employees. This country was built on freedom of religion. People of the same faith feel differently about birth control. There is no one interpretation of it and that should be left up to the individual.

Mandating birth control coverage allows everyone to be equal. Without it, we are subject to the religion/interpretation of religion by our employer. In addition, corporations are not people; they have no soul that will go to Heaven or Hell. Their members may follow a religion but something without a soul cannot have a religion.

No other medication is singled out like this. This is politics interfering with people’s health. Keep politics out of medicine. Leave medicine to the medical providers.

It Costs More Not to Pay for Birth Control

It is fiscally stupid and morally wrong to not cover birth control because it is cheaper to cover birth control than unintended pregnancies. Birth control costs $330/yr versus an abortion costs $800, vaginal delivery $10,000 at the minimum, and C-section $40,000 (which does not include the pre and post-natal care and the cost to society of an unplanned, unwanted pregnancy).

It’s basic math.
If you don’t like abortion, pay for birth control. Don’t force your religion on me. Corporations don’t have religions because they aren’t people and they don’t have a soul.

Per a 2011 study, about 14% of women in the United States or 1.5 million women (this number has likely increased) use birth control for non-contraceptive purposes. 58% of pill users use the pill partly for reasons other than pregnancy prevention. Those who are using birth control for non-birth control reasons could be harassed by providers and pharmacists and, thus, deprived of necessary treatment.

Many women use it for non-birth control purposes and they could be harassed to the point of not using the medication and then suffering dire consequences e.g. losing an ovary or lots of unnecessary pain (endometriosis). That’s what happened to Sandra Fluke’s colleague at Georgetown Law School.

Why Should Women Suffer because of Political Machinations?

According to a 2011 study by the Guttmacher Institute, “After pregnancy prevention (86%), the most common reasons women use the pill include reducing cramps or menstrual pain (31%); menstrual regulation, which for some women may help prevent migraines and other painful “side effects” of menstruation (28%); treatment of acne (14%); and treatment of endometriosis (4%). Additionally, it found that some 762,000 women who have never had sex use the pill, and they do so almost exclusively (99%) for noncontraceptive reasons.”

We’re in this Together

Pandia Health is here for you. We will never give up the fight for accessible birth control. We believe every woman, regardless of race, sexual orientation, religious background, etc. should have easy and safe access to affordable birth control.

A woman’s uterus is not grounds for a war on religious freedom. Insurance coverage of birth control does not mean a woman will choose to be sexually active – although she absolutely has that right. Her body, her choice!

Covering birth control costs gives women peace of mind so they don’t have to worry about getting pregnant or experiencing painful periods. Women can make their #PeriodsOptional with birth control, which is something not many women are taught they can do. Thus, their quality of life can be immensely improved through the use of birth control; contraception can also lower the risk of endometrial and ovarian cancer.

Long story short, the benefits of birth control go beyond advocating for reproductive justice and sex positivity. All people with uteri deserve equal care. Pandia Health will continue to fight for equal access to affordable birth control and provide educational resources about contraception and women’s health.

We know that some women do not have the financial means to afford birth control without insurance, which is why we have launched a Birth Control Fund on our “Social Good” page. Check it out to learn more about our goal to provide confidential, convenient, and affordable access to birth control for all women. We are here for you!

Get Started
« When does birth control start working?
Back to Blog
5 Ways to Stay Safe While Protesting »