Explaining Periods To Men: A Complete Guide On How To Make Even Cavemen Understand 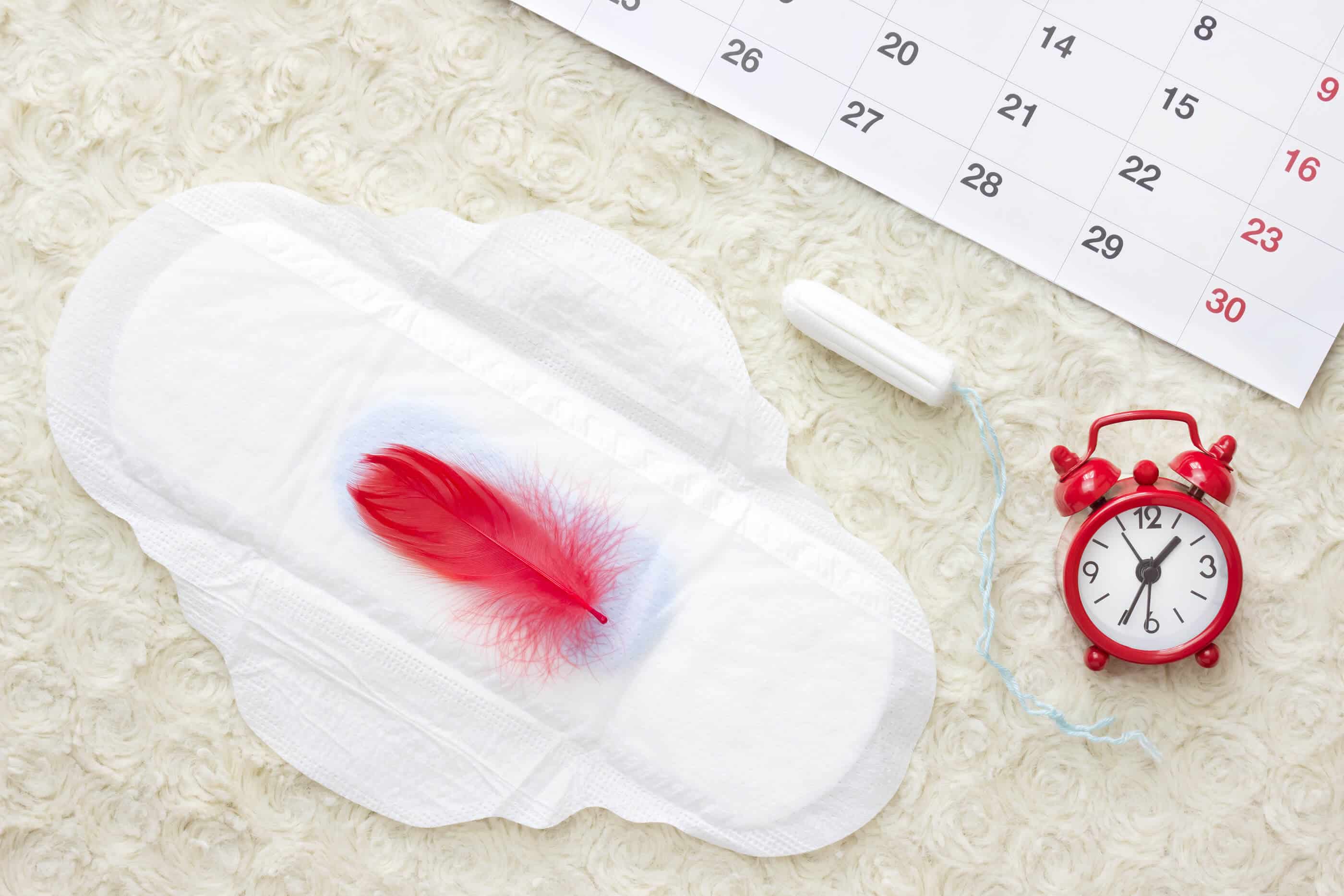 Did you know that 51% of men believe it is inappropriate for women to openly discuss their periods in the workplace. Additionally, 44% of the men admitted having made a joke or comment about a partner’s mood when she was on her period. These numbers come from a poll commissioned by Thinx of 500 men in the United States.

These numbers show that, while there has been increasing societal pressure to eliminate the stigma associated with the concept of menstruation, many men are still uncomfortable discussing periods. Menstruation. Tampons. Pads. Uterus. Withdrawal bleeding. They’re all terms that make a large percentage of men shift uncomfortably in their seats.

Here’s the reality: most people with a uterus will spend about 40 years menstruating. Whether you acknowledge this or not, it doesn’t change the fact that around 50% of the people you know menstruate regularly. Menstruation goes on and on and on.

Here is a back-to-basics cheat sheet to help you discuss the period of menstruation with any man. You can even just send them the link to this article!

What is the social stigma surrounding menstruation?

In a study by Kindara on how men perceive menstruation, a large number of participants stated that a woman on her period is “less clean and less attractive.” This is ridiculous. Menstruation is a normal bodily function that affects half of the world’s population.

Look at it from this angle: all human beings poop (and far more often than people with uteruses menstruate) and yet, we don’t see each other as ‘less clean’ or ‘less attractive’ because of it. So, why should we see menstruation differently?

Educating yourself on how really periods work and learning to separate the facts from myths can go a long way in demystifying the topic.

Disclaimer: Every person with a uterus experiences menstruation differently. Don’t rely on this guide as a definitive explanation of how all those with uteri menstruate. 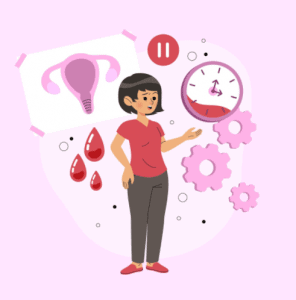 How do periods work?

Around every 23 to 35 days, the uterus develops a lining intended to nourish and protect a fertilized egg (fetus). The fertilized egg must attach itself to the lining in order to grow. When no pregnancy occurs during the cycle, the lining is shed along with nutrients, dissolved remnants of the egg, and tissue such as blood. This is what is known as menstruation, or a period.

Basically: no pregnancy = no need for uterine lining = monthly bleeding.

How often does menstruation occur?

Every person’s cycle is different, but the average cycle is between 23-35 days long. A menstrual period starts with the body expelling the old uterine lining as blood. This happens when the egg the ovaries have released isn’t fertilized. The menstrual period ends with the body preparing again to get pregnant by releasing an egg from the ovaries to be fertilized. Menstrual bleeding can last between three to eight days, with the heaviest bleeding occurring during the first few days.

What happens if someone has an abnormal menstrual cycle?

When the menstrual cycle occurs over a longer period of time or a person’s bleed is extremely long, heavy, or painful, these can be signs of a medical condition. Common conditions include endometriosis, polycystic ovary syndrome (PCOS), or bleeding disorders, such as Von Willebrand’s disease. If a person bleeds for more than seven days in a row or experiences dizziness, cold extremities, or severe pain, it is recommended that they see a doctor to be evaluated and treated.

What premenstrual symptoms do people experience?

Before a person’s period starts each month, they may notice symptoms. These are known as premenstrual syndrome (PMS) symptoms.

While the media has been consistent in portraying food cravings and mood swings as the key symptoms of an upcoming period, women experience all sorts of symptoms including, but not limited to: cramps (this can range from mild to painful), acne breakouts, sore breasts, bloating, and diarrhea. Let’s break some of the most common symptoms down:

In the weeks and days leading up to their period, an individual may crave especially sweet or starchy foods.

This is due to fluctuating hormone levels leading to an imbalance of estrogen and progesterone, which causes cravings. Furthermore, when we eat certain foods, our brain releases serotonin, which helps alleviate PMS symptoms.

Cramps are caused by contractions of the uterus, which occur as it sheds its lining. They can easily be the most dramatic part of having a period, as they are the most painful.

Cramps can happen at any time of a person’s cycle with differing levels of intensity and can also signal ovulation or come in the form of pre-menstrual cramps. Severe cramps or pelvic pain can also be a sign of a more serious condition like endometriosis.

Emotional symptoms are frequently experienced by people who deal with physical discomfort during their period.

Additionally, changes in hormones may cause mood swings. There is speculation that estrogen levels can correspond to levels serotonin, the neurotransmitter associated with our mood. As estrogen levels fluctuate during a person’s cycle, this can ultimately affect their emotional state.

How long does sperm live?

Sperm can live for up to five days in the vaginal canal. An egg, however, only lives for 24 hours. This demonstrates what is known as the ‘fertile window’, a period of 7 days during which intercourse could lead to pregnancy. Even if you have sexual intercourse in the days prior to ovulation, a person with a uterus can still get pregnant if the sperm continues to make its way towards the newly released egg once released.

Can you get pregnant during your period?

Contrary to popular belief, it is possible for a woman to get pregnant if she has intercourse during her period. While it is unlikely, it is entirely possible. A woman with a short cycle can start ovulating a few days after her period, and sperm present from intercourse from up to five days earlier can still fertilize the egg. This is why contraceptives are still the best option for preventing unwanted pregnancy.

What are the different sanitary products available?

If you’ve ever walked down the toiletries aisle in a grocery store, you’ve likely noticed how many sanitary products are available to help with menstruation. From pads to tampons, menstrual cups to period-proof underwear, there are dozens of products available to choose from. Each of these products is designed to serve different women with different preferences.

Tampons look like little while fibrous rods with a string hanging from one end. They are normally made out of cotton, rayon, or a mix of both. These sanitary products in particular are single-use and are inserted into the vagina. They can sometimes come with a plastic applicator to help with insertion, but some women prefer to use versions without. Tampons come in different sizes with different levels of absorbency. They typically last for about 4-8 hours, absorbing blood until they are removed and replaced with a new tampon. 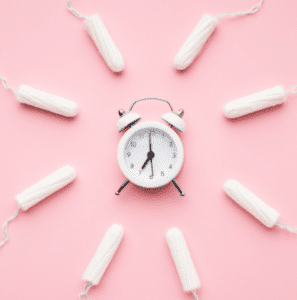 Pads (AKA sanitary napkins or towels) are worn in the underwear to absorb any blood that comes out of the vagina. They come in many different sizes based on the heaviness of one’s flow, with options designed specifically for nighttime use (when you’re at higher risk of leaking), and many even come with wings to help secure the pad to the underwear. Like tampons, these are meant to be replaced after a few hours. 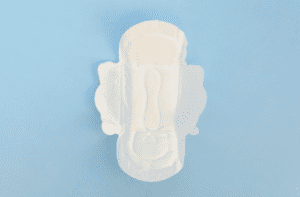 Menstrual cups are a more sustainable period product compared to tampons and pads. They are little cups made of medical-grade silicone that are inserted into the vagina to collect blood. Unlike a tampon, menstrual cups can be left in the vagina for up to 12 hours before needing to be emptied, cleaned, and reinserted. One menstrual cup can be used multiple times and, if taken care of properly, can last around ten years!

Menstrual disks, like menstrual cups, are inserted into the vagina to collect blood. They can also be worn up to 12 hours but must be discarded after use and replaced with a new one.

Pantyliners are very similar to pads in that they are worn in underwear and collect blood that comes out of the vagina. The only difference between panty liners and pads is their size and absorbance level. Pantyliners are generally much smaller and thinner and can’t absorb as much as a pad. These are normally used at the very beginning or very end of a period when there is not a lot of menstrual flow to collect. Period-proof underwear is made of absorbent material, much like a pad. But there is no pad. It’s just underwear. They are meant to keep any absorbed liquid locked in so it doesn’t ruin the individual’s clothes. Once the underwear is worn for a certain amount of time (depending on type and amount of menstrual flow) can be washed and used again. Like cups, they are much more sustainable than disposable sanitary products!

How much does having a period cost?

Unfortunately, having a period can be expensive. All of the things needed to get through menstruation are not given away for free. That means people can end up spending large amounts of money on period products. Interested in how much periods cost the average person? Here’s a quick guide through the $$$.

Having a period is a big deal. It’s more than just ‘that time of the month’ or a punchline for bad jokes about women and people with uteruses.

There can be a great deal of secrecy and shame associated with menstruation. This needs to change. Men have a significant role to play in normalizing periods. Understanding the basics is a step in the right direction.

Pandia Health makes women’s lives easier by delivering the pill, patch, and ring directly to their mailbox. We also pride ourselves on prescribing birth control based on how a person’s body will react, which includes helping manage symptoms associated with periods.

With just one $20 payment a year, you can get access to our expert doctors for 364 days (available if you live in AZ, CA, CO, FL, GA, NV, TX, WA, or WY). That means unlimited questions and advice, which is especially important if you want to change your birth control. Get started to begin your birth control journey today!

Plus, we seek to educate individuals about how periods and birth control work to empower people to make the right decisions for themselves. Check out our social media to discover the exciting world of Pandia Health. 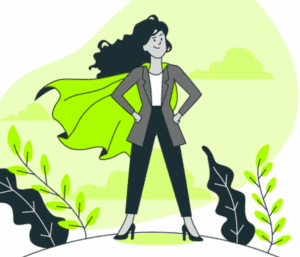 What are fallopian tubes?

At what age does a girl have her first period?

Girls can get their first period between the ages of 10 and 15, with many starting their period at around 12 years old. This is normally a sign that they are getting close to the end of puberty.

What is toxic shock syndrome?

Toxic shock syndrome (TSS) is a rare and potentially fatal condition that occurs due to certain bacterial infections. TSS is often associated with leaving a tampon in for too long, but it can affect almost anyone as it’s caused by toxins that come from Staphylococcus aureus, or staph, bacteria. Other risk factors include having cuts or burns on your skin, having surgery, or having a viral infection.

Disclaimer: The views expressed in this article intend to inform and induce conversation. They are the views of the author and do not necessarily represent the views of Pandia Health. This article is not, nor is it intended to be, a substitute for professional medical advice, diagnosis, or treatment and should never be relied upon for specific medical advice.

Get Started
« Apotex Corp. Birth Control Recall – What You Need To Know
Back to Blog
Birth Control in Pop Culture: From Incredibly Accurate to Totally Wrong »